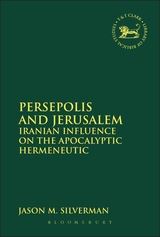 Did Persian Zoroastrianism inspire the apocalyptic turn among various Jewish sects of the early Second Temple Period? It is a question not easily answered. The sources available for understanding Judaism at this period are scarce and not easily interpreted. Even more daunting are the relevant Persian materials. These exist in difficult languages and obscure texts transmitted orally for centuries and finally redacted in the late Parthian or even early Muslim eras, a millennium after the florescence of Jewish apocalypticism. Further, investigation into this connection is hampered not only by the relative inaccessibility of the sources but also by theologically-grounded inhibitions of many Bible scholars: Christian researchers working in a confessional context sometimes hesitate to pursue a history-of-religions agenda. If Zoroastrianism made a substantial contribution to Jewish apocalypticism, where would that leave the Christian faith born in its matrix? If the latter is the mother of Christian theology, would Zoroastrianism be the grandparent? Rather than dive into this intimidating quagmire of historical and theological difficulties, many scholars are content to ask rhetorically, What does Persepolis have to do with Jerusalem?

The answer Jason M. Silverman gives is this: Much in every way! His monograph, a revised dissertation written under Anne Fitzpatrick-McKinley of Trinity College Dublin, attempts to establish not so much the extent and nature of Persian influence on Jewish apocalypticism but a methodologically sophisticated program for doing so. Silverman therefore combines a theoretical model for understanding cultural influence with a series of detailed case studies, offering the entire package as a blueprint for future research.

The opening section is simply titled “Prolegomena,” and in it Silverman sets the stage for the remainder of the monograph. He provides a brief overview of past research into Persian influence on Jewish religion, summarizes the state of research into the origins of Jewish apocalypticism, and provides a theoretical model for assessing the influence of one religious tradition on another. Although the discussion rangers a bit further afield than perhaps is necessary, Silverman does establish a framework for the ensuing argument. In his understanding, apocalyptic eschatology focuses on the ultimate end of human history, but does so through the prism of a given religious tradition. What distinguishes apocalyptic writings and provides their common denominator is not a coherent theology or shared social location (Silverman is generally skeptical of deprivation theory for explaining an apocalyptic mindset). Rather, apocalyptic scribes employed a hermeneutical grid to reinterpret authoritative texts and traditions in light of an eschatological expectation. Silverman closes with a nuanced discussion of religious influence, delineating the varied ways one religious culture can affect another, and adducing a set of criteria to establish when such a relation occurs.

Over the following three chapters, Silverman lays the foundation on which he subsequently builds his detailed textual comparisons. These chapters tacitly acknowledge the obvious: scholars who use texts existing only in ninth-century recensions as the background for texts produced a thousand years earlier clearly bear the burden of proof. But it is a burden Silverman handles deftly. Chapter one, “The Iranian Sources: Religion and Royal Ideology,” examines a range of early evidence attesting to Iranian religion during the Achaemenid period. Comparative material, particularly the Rig Veda (which shares common linguistic roots with Avestan literature), linguistic data, archaeological remains, and royal propaganda provide considerable information concerning ancient Achaemenid religion and confirm the antiquity of textual material extant only in late documents. Even more compelling are the classical sources, from which Silverman extracts much useful data. He also includes a brief discussion of Zoroastrianism’s main historical phases in antiquity, especially in relation to monotheism, dualism, and the so-called Zoroastrian heresy of Zurvanism.

Chapter two continues in the same vein. Entitled “The Achaemenid Context,” it aims to demonstrate the extent of Iranian influence throughout the empire established by Cyrus the Great. In making this case, Silverman shows that contacts between Jews and Persians need not have been limited to ancient Iran proper, but may have occurred in a variety of locales. He also makes the related point that contact between these two groups need not have spurned Jews to categorical rejection of or capitulation to Persian religion. Rather, influence can occur through a Persian-provoked reassessment of Jewish culture and worldview undertaken by Jews themselves. In Silverman’s concluding statement, influence is a matter “of how the continual process of reinterpretation occurred in dialogue with foreign ideas which came to be perceived as latent within the Jewish tradition itself, whether consciously or subconsciously” (97).

If chapters one and two present the conditions for the possibility of cultural exchange between Persians and Jews, chapter three mounts a critique of pure textuality. Silverman calls in scholars to expand their awareness of communicative media and break free from a sort of textual thralldom. Although it is easy enough to understand, in theory, why Silverman sees this topic as a natural extension of the previous two, in actual execution the discussion commits a common fault among published dissertations (and, presumably, unpublished ones as well): it forces the reader through the full gamut of research undertaken by the author, rather than guiding the reader through the area where range of research intersects the issues at hand. In his case, we learn far more about media theory than Silverman ever applies to the topic of Persian influence on Jewish apocalypticism. Eventually, he takes up several texts to show that the rise of apocalytpicism coincided with an increased emphasis on textuality within elite scribal circles. But his insistence that any examination of religious influence in antiquity attend to the residual orality prevalent even among ancient scribes is not carried out in the textual analyses of the following chapters (negligible exceptions occur in passing on pp. 185, 193).

An examination of specific passages from the biblical and Enochic corpora is carried out in chapters four and five. The reader should approach this material not as a systematic analysis of Persian influence on Judaism: there is no comprehensive examination of angelology, resurrection, or dualism except as these issues relate to the specific texts under investigation. Rather, Silverman presents a series of signposts that lay the groundwork for the programmatic proposals in chapter six. The passages studied, along with the possible Persian influence on them, are these: Ezekiel 37 and the origins of belief in a resurrection; Ezekiel 38–39 and the eschatological battle; Daniel 2 and the periodization of history; 1 Enoch 1–36 and the angelic/demonic inspiration for cultural advancement; 1 Enoch 1–36 (again) and the binding of demonic beings until judgment; 1 Enoch 37–71 and judgment by “weighing”; and 1 Enoch 106–107 and the birth of Noah. This enumeration of topics, however, does little justice to Silverman’s detailed investigations, subtle analyses, and sensitive handling of evidence. While not all the connections he draws will convince, even those unpersuaded will have to recognize the wide range of learning Silverman applies to the texts in question. Even a passing familiarity with the problems of Zoroastrian origins and its interconnections with contemporary religions will impress, and probably intimidate, the prospective researcher with the exacting requirements of comparative study such investigation demands. But Silverman proves himself more than capable, drawing on material from Scandinavia to India. One especially helpful contribution he makes is not merely a recognition that but an explanation how Persian influence can exist alongside simultaneous religious and intellectual trends impinging on Judaism from Mesopotamia, Canaan, and Greece. Another theme emerging in these chapters, which will reappear in chapter six, is the power of historical moments to generate new meaning through the reinterpretation of received texts. Scholars interested in any of these topics or passages will find that Silverman offers much of value.

In chapter six, “An Apocalyptic Hermeneutic,” Silverman lays out a prospectus for further research into the influence of Persian intellectual traditions on the development of Jewish religion and specifically Jewish apocalypses. He argues that a category of Apocalyptic Hermeneutic (following his capitalization) can best account for the emergence of recurrent motifs in diverse and even ideologically distinct texts. As a human activity for understanding received traditions and applying them to new situations, interpretation encompasses a range of overlapping and conflicting responses. When this process occurs within an apocalyptic worldview, tradents naturally produce diverse reformulations, some quite distinct and idiosyncratic, some closely related to others, and some in obvious conflict. Silverman applies this Apocalyptic Hermeneutic first to select texts from the previous chapters and then to a set of theological and ideological topics (the temple, theodicy, predestination, etc.) The point of this examination is to encourage future research in the direction of greater methodological sophistication. Rather than asking, “Did Persian influence lead to the rise of Jewish apocalypticism, yes or no?” Silverman wants scholars to evaluate the way Persian religious traditions affected different sectors of Judaism in various ways, inspiring a certain framework for understanding (the Apocalyptic Hermeneutic) which nevertheless allowed for diverse interactions. A brief “Megalegomena” restates these proposals in succinct form.

For those in need of some guidance around the complicated literature of ancient Zoroastrianism (which, it is probably fair to say, includes most Bible scholars), Silverman adds some very helpful appendices covering its sources and key terms. He also includes a series of definitions of his key theoretical terms (“influence,” “myth,” etc.). An extensive bibliography and indices of references and of authors (but not of subjects) wraps up the volume.

Having already indicated along the way points of criticism and commendation, I will conclude only by reiterating the value of this monograph for moving scholars of the Bible and of Ancient Judaism toward appreciating the complexity of evaluating Persian influence on Jewish apocalypticism; acknowledging the likelihood that this did in fact occur, however obscure the sources; and pursuing a sophisticated analysis of cultural appropriation as the category for understanding this influence. Silverman bases his arguments on prodigious learning and sets them forth with clarity. His volume has an important voice among those investigating the origins of Jewish apocalypticism.