Papers from the 5^ (2015) Enoch Seminar Nangeroni Meeting in Naples, Italy.

Despite the impressive strides made in the past century in the understanding of Second Temple Jewish history and the strong scholarly interest in paideia within ancient Greek, Hellenistic, Roman, and late antique Christian cultures, the nature of Jewish paideia during the period has, until recently, received surprisingly little attention. The essays collected here were first offered for discussion at the Fifth Enoch Seminar Nangeroni Meeting, held in Naples, Italy, from June 30 – July 4, 2015, the purpose of which was to gain greater insight into the diversity of views of Jewish education during the period, both in Judea and Diaspora communities, by viewing them in light of their contemporary Greco-Roman backgrounds and Ancient Near Eastern influences. Together, they represent the broad array of approaches and specialties required to comprehend this complex and multi-faceted subject, and they demonstrate the fundamental importance of the topic for a fuller understanding of the period. The volume will be of particular interest to students and scholars of the history and culture of the Jewish people during the Hellenistic and Roman periods, ancient education, and Greek and Roman history. 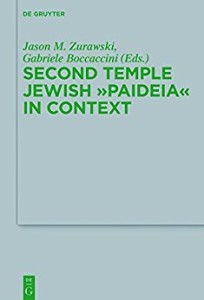