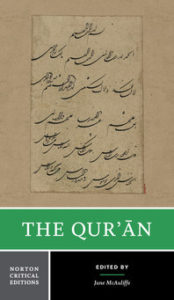 Although the book will undeniably be of interest to many scholars, the first inevitable impression one has before Jane McAuliffe’s new edited volume on the Qur’an is its asymmetry. For an ambitious book that aims at presenting the reader with qualified information on, and more or less detailed analysis of, some key aspects relative to the study, interpretation, and appropriation of the Qur’an from, roughly, the mid-eighth century to the present day—and that offers the reader thereof an extensive selection of readings extracted from traditional commentaries and the scholarly literature produced over the past one hundred years or so[1]—it should have also provided the reader, one cannot help fancying, an updated, rigorous English translation, together with a large critical apparatus, of the document in question. Instead, the reader is afforded a slight reworking of Muḥammad Marmaduke Pickthall’s 1930 English translation of the Qur’an plus a few additional, albeit somewhat circumspect, notes. McAuliffe justifies her choice by stating that she wants to “produce an accessible text with glosses that assist readers but do not overwhelm them with unnecessary information” (xxxvi)—one wonders, though, what precisely may be deemed unnecessary in the presentation of a text whose complexities have become especially apparent over the past two decades, particularly as regards the nature and setting of its Grundschriften.[2] Moreover, she praises Pickthall’s almost “literal rendering of the original Arabic” (xxxv)—which is debatable: notice, for example, the apologetically biased rendering of ḏālika al-kitāb as “this scripture” instead of “that writing” (Q 2:2), an issue that McAuliffe visibly overlooks[3]—as well as his “clarity . . . [concerning] word choice and syntactical construction” (xxxv)—which is true—and the wide recognition of Pickthall’s translation “across the English-speaking Muslim world” (xxxii). In all probability, the latter must be seen as a crucial—if not as the crucial—argument behind McAuliffe’s choice, as in the very opening lines of her introduction she conventionally opts to define the Qur’an as “the sacred scripture of 1.6 billion people” (xi, my emphasis). Not that this definition is incorrect, of course; yet a simultaneous reference to the quranic corpus as a “late antique document” (or something of the like) would have been greatly appreciated considering the otherwise suggestive examination of its “narrative matrix” in light of several biblical and parabilical writings on pp. 387–92 and 392–99 (which point to the dependence of the Mary narratives displayed in Q 3 and 19 upon the Protevangelium of James and a number of Syriac texts whose dialogue poems the Qur’an may be said to mirror), and 399–403 (where the author signals out, in turn, the talmudic connections perceptible behind the Moses narratives in Q 7 and 26). These (inter)textual intersections are well known to most (if not all) specialists, yet the general reader may not be aware of them, for which reason the inclusion of Andrew Rippin’s and Sidney Griffith’s excerpts on pp. 539–44 and 544–51—under the common heading “The Qur’an and the Bible”—must be applauded.

McAuliffe’s revised rendition of Pickthall’s 1930 version of the Qur’an comprises pp. 1–349, and is preceded by an introduction (xi–xxxvi) in which she begins by recalling that “in the lives of Muslims, the Qur’ān is experienced before it is studied” (xii).  Furthermore, she underlines the risk of misinterpretation that the Qur’an is susceptible of by non-Muslims readers, whom, she claims, “have frequently been exposed to denigrations or dismissals of the Qur’ān, to misinformed or even antagonistic misperceptions, well before they encounter the work itself” (xii). Thus the peril of Islamophobia is highlighted at the very outset of the book, with no allusion being made, however, to the parallel risk of apologetics. And so once more one gets the impression that the volume responds to—and is ultimately constrained by—an unconfessed (perhaps unconsciously assumed as something altogether natural, and hence unperceived?) ideological (rather than strictly scholarly) purpose. This said, it must be stressed that the author aptly distinguishes, and summarizes with clarity, on the one hand, the traditional accounts of the Qur’an’s origins (xiii–xvi), which she appropriately describes as “shaped to present a form of ‘salvation history’” (xviii), and, on the other hand, some of the renewed explorations that the historical-critical study of its lexicon, canonization, ideology, and geographical-cultural setting has encouraged from the mid-twentieth century onwards (xvi–xix)—as two independent “trajectories of textual study” that, she believes, have now more chances to interact and thereby foster “fruitful academic dialogue” (xiii). How might concessions to “salvation history” promote academic effectiveness—be it in dialogical form or otherwise—is, nonetheless, something a little bit hard to understand, to put it mildly.

Conversely, the presentation of the Qur’an’s pervasive impact on Islamic thought, life, and culture undertaken on pp. xix–xxx proves extremely helpful. Overall satisfactory, too, is most of the concluding section dedicated to the English translations of the Qur’an (xxx–xxxvi), although the author’s complete silence concerning Arthur Droge’s excellent (due to its linguistic faithfulness and scholarly awareness) 2014 translation[4] is inexplicable—although she does not forget to mention several indirect translations by Muslim scholars who have adapted into English their Urdu, Persian, and Turkish versions of the Qur’an (!). The introduction ends with a (perhaps too) vivid tribute to Pickthall’s life-project and work (xxxiii–xxxv), writing skills (xxxii), and “orthodox” sensitivity towards the Qur’an (pp. xxxiii, xxxv), accompanied by a note on the simplification of his translation undertaken by the author—which, she confessedly hopes, will not amount to entirely “sacrific[e] [Pickthall’s] tone of reverence and respect” (xxxvi), followed by a few due acknowledgements.

Immediately after Pickthall’s revised translation, the reader finds a few random black-and-white photographs: a Medieval qur’anic folio, an Indian miniature portraying the qur’anic Mary with Jesus, two African-American teenagers memorizing the Qur’an, the Dome of the Rock in Jerusalem, and so forth (350–55).

The first of these sections gathers together a number of traditional and contemporary excerpts relative to Muhammad’s life, legends, and successors—from Ibn Isḥāq to Fred Donner, whose take on the “ecumenical” (on his reading) character of the earliest quranic community[5] thus puts an end to the exploration of the Qur’ān’s at best ambiguous Muhammadan beginnings (357­­–85). The aforementioned subsection on the Qur’an’s (para)biblical “narrative matrix” (to which a short incursion into its post-qur’anic legacy in Muslim tradition is appended) follows on pp. 387–410.

The section titled “Interpretations and Analysis” comprises, in turn, five subsections or chapters: (1) classical and modern commentaries of the Qur’an, from al-Tustarī to Sayyid Qutb (411–41); (2) its influence on a number of intellectual developments pertaining to the domain(s) of traditional Islamic theology and spirituality (443–82); (3) contemporary qur’anic scholarship (483–528), with assorted excerpts from the works of Toshihiko Izutsu (on qur’anic ethics), Meir Bar-Asher (on Shi’ite exegesis), Amina Wadud (on Islamic feminism), Harald Motzki (on the collection of the Qur’an), Manuela Marín (on gender dynamics reflected in the Qur’an), and Stefan Wild (on the Qu’ran’s political interpretation); (4) literary studies of the Qur’an (529–37), with fragments from works by Devin Stewart (on qur’anic prosody and structure) and Angelika Neuwirth (on the linguistic and literary character of the qur’anic corpus); and, lastly, (5) the Qur’an and the Bible (539–51), with—as I have already mentioned—two brief excerpts by Rippin and Griffith. Yet McAuliffe’s proposal to separate (4) and (5) from (3), that is, the withdrawal of the literary and biblical studies from the “spectrum of contemporary scholarship,” is quite hard to understand: if contemporary studies on the corpus’s (para)biblical matrix, structure, and literary style do not belong in the category of “contemporary scholarship” on the Qur’an, it is then difficult to imagine under which rubric they could alternatively fall. Likewise objectionable, in my view, is the editor’s choice in terms of contemporary scholarly currents—or at least too limited, as she exclusively allows the volume to reflect, here and there, the most moderate—and hence the less challenging—positions, as though the middle ground could be said to provide a priori the best criterion in all eventual scholarly discussions.

The section entitled “Sounds, Sights, and Remedies” deals, for its part, with issues such as the traditional learning, reciting, and memorizing of the Qur’an (553–83) and its use in fortune-telling and healing practices (591–601), including the induction of pregnancy (595). Certainly, the worlds surrounding the Qur’an are manifold, and this section provides the reader with valuable information regarding the way in which—as earlier said—the Qur’an is both studied and experienced by the Muslims themselves in their everyday life. Yet one cannot be but puzzled by the incorporation of a final chapter on qur’anic manuscripts and material culture within this particular section. Would it not have benefited the whole volume, and more broadly the reader’s preliminary approach to the study of the Qur’an, to have placed this important chapter elsewhere, perhaps by dividing it into two distinct albeit complementary parts and setting them inside the sections dedicated to examining the document’s origins and posterity?

Finally, in “The Qur’ān in America” MacAuliffe writes that “in recent decades, the study of Islam in America has increasingly turned to the history of those long forgotten or ignored: the Muslims who came to this country in the slave ships that sailed from west Africa,” and that “while reliable statistics do not exist, scholars have estimated that eventually the number of African Muslims and their descendants who lived in colonial and antebellum America could be numbered in the tens of thousands” (629). To illustrate this point, and give back their voice to those early-repressed American Muslims, she reproduces the autobiography of Omar Ibn Said, a nineteenth-century Muslim American slave (629–33). And, in this spirit, the volume closes with an excerpt from chapter 3 of Denise Spellberg’s Thomas Jefferson’s Qur’an[6] (634–39). The reader is thus reminded that in 1765 Jefferson bought a two-volume copy of the third edition (1764) of George Sale’s acclaimed English translation of the Qur’an (which he had originally published in 1734). “When he bought [Sale’s] Qur’an . . . Jefferson was an impassioned law student engaged in criticizing the recently passed British Stamp Act,” says Spellberg. “The most immediate reason for wishing to study the Qur’an,” she adds, “would have been to gain an insight into Islamic law and religion. These may have interested him per se—Jefferson had an immense curiosity and a cosmopolitan outlook—but he may have had a more immediate purpose, for in seeking legal precedents for local Virginia cases, he would often look to other cultures around the world.” Next, she recalls the 1770 fire that affected Jefferson’s family house (more precisely, his mother’s house) and that dramatically caused the loss of most of his library—an episode echoed in both a letter written by Jefferson to his friend John Page and the Virginia Gazette. We do not know, underlines Spellberg, if Jefferson’s copy of Sale’s translation of the Qur’an survived the fire. “But if [it] was destroyed in 1770, then what are we to make of the two volumes . . . he initialed, now at the Library of the Congress in Washington, D.C.? There are two possibilities,” she subsequently observes: “The original Qur’an either survived the fire, or it was later replaced with another copy of the same edition.” Now, “if Jefferson did indeed buy the Qur’an twice, it would be an extraordinary testament to his desire to understand Islam. But even if he purchased the text only once, Jefferson remains unique among America’s founders in his desire to understand Islam on its own terms, looking directly to its most sacred source. . . . [Besides, Jefferson and Sale] had in common a rejection of coercion or violence against religious minorities on account of their faith, and this alone puts them both within an alternative strain of European thought endorsing religious toleration; Jefferson would go even further, calling for the guarantee of individual rights regardless of religion,” she concludes. And such, too, is the volume’s conclusion, which ultimately makes it a post-9/11 ideological phenomenon delivered under a not-fully-persuasive—let alone alluring—scholarly disguise.

[3] See also the naïf treatment of the Qur’an’s presumed “self-referentiality” put forward on p. xix, which likewise fits into such unreservedness.

[5] For a critical assessment of Donner’s reconstruction, see Patricia Crone, “Among the Believers,” Tablet, August 10, 2010, http://www.tabletmag.com/jewish-news-and-politics/42023/among-the-believers.