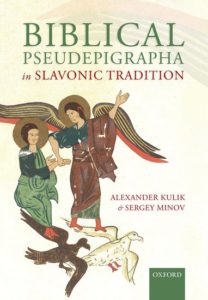 Alexander Kulik’s and Sergey Minov’s Biblical Pseudepigrapha in Slavonic Tradition is an important and necessary volume on the extrabiblical traditions prevalent in the literature of Eastern Europe. The volume is a bilingual collection of eight smaller works which are only preserved in Slavonic, the ecclesiastical language of Orthodox Europe. Most of the works have actually appeared in earlier English translations, duly noted by the authors, scattered across a number of different collections. Two, the Tale of the Tree of the Cross and About the Ark, appear here for the first time in any Western European language. The collection therefore fills an important gap in the history of scholarship and provides a good basis for further work in this fascinating and neglected corner of Pseudepigrapha research.

Unfortunately, I must begin with a criticism of the title of the book relative to its contents. In Pseudepigrapha studies, the word “Slavonic” immediately suggests 2 Enoch, the Apocalypse of Abraham, and the Ladder of Jacob, the three works included in the influential collection of James H. Charlesworth.[1] Consequently, most scholarship on the Slavonic Pseudepigrapha focuses on these three. However, 2 Enoch and the Apocalypse of Abraham are not found in the present volume. Their absence is not a fault in itself. New editions of these longer works would be a massive undertaking. The problem is the way the work presents itself. The title, as it stands, is misleading, especially since the introduction presents the corpus as a collection of minor Pseudepigrapha. The sense of false advertising extends to the jacket image, which is an illustration of the Apocalypse of Abraham!

The general introduction situates the volume as a collection of works exclusive to the Slavonic literary tradition (i.e., not translations of Greek works) which are indebted in some way to Second Temple Jewish tradition. Their comments on the individual texts, however, tend to focus on Byzantine, rabbinic, and even Islamic antecedents—that is, medieval sources— rather than Second Temple works. This should not be surprising, since the Slavonic texts themselves are medieval works. Barring the Ladder of Jacob, they are also Christian works, which always ties the primeval history to the death and resurrection of Christ. The collection is therefore called Biblical Pseudepigrapha rather than the more conventional Old Testament Pseudepigrapha. In fact, the works blur the line between Old Testament Pseudepigrapha and New Testament Apocrypha.

Each of the eight texts is preceded by a brief introduction, including a list of manuscripts, translations, and previous scholarship, and followed by extensive commentary on each portion of the text. The Slavonic text is presented first—sometimes as multiple recensions in parallel columns—followed by the English translation. In a few instances, the Slavonic text and English translation appear synoptically. The synoptic presentation has a certain pedagogic value (it is easy to pick up some Slavonic vocabulary by comparing the two) and one wishes that this format had been adopted for all of the texts in the volume.

The eight texts require some words of introduction. The first work, About All Creation, describes the Hexameron. It is notable for its polemic against the idea that Satan was expelled from heaven for refusing to adore Adam, a tradition prevalent in the Life of Adam and Eve and the Qur’an. The author instead maintains that Satan fell by attempting to establish himself as equal to God (cf. Isa 14:12-14), which became the common Christian tradition. The work ends with a notice on the mission of Jesus.

The second work, The Creation of Adam, focuses specifically on the events of the sixth day. The familiar biblical narrative is embellished with accounts of Satan’s attacks against the inanimate body of Adam, despite God’s attempts to protect the body by creating a dog. Adam, upon waking, has a prophetic vision of the coming of Christ and the preaching of Peter and Paul. The second half of the work covers Adam’s sojourn in Paradise but is inconsistent on the length of his stay—either seven days or six hours.

The third work, Adam’s Contract with Satan, tells how Adam and his descendants became debtors of Satan, builds on the reference to a “cheirograph” in Colossians 2:14. According to the legend, Adam was tricked by Satan into signing a document promising that his children would belong to the devil. The contract is hidden in a rock within the Jordan, which Christ destroys at his baptism. This story is found in many Eastern Christian traditions.[2]

The fourth work, The Tale of the Tree of the Cross, is the most important Slavonic contribution to the rich tapestry of legends about the origin of the wood of the cross. The tale not only describes the origin of the cross of Christ, brought from Seth out of Paradise, but it also addresses the crosses of the two thieves, the first recovered by a penitent Lot, the second found by Moses in the wilderness. The work describes the incorporation of the three crosses into the Temple of Solomon prior to their arrival at Golgotha. The story is like a summa of earlier cross legends, including those found in the Palaea Historica and the Slavonic Life of Adam and Eve.

The fifth work, The Appeal of Adam to Lazarus in Hell, begins with the righteous dead of the Old Testament learning of the birth of Christ. They decide to send Lazarus as an emissary to petition for their release. Adam composes this plea, consisting of a list of major figures from the Old Testament and their good deeds. A longer version briefly recounts the resurrection of Lazarus. The work anticipates Christ’s descent into Hell and is particularly close to the Gospel of Nicodemus.

The sixth work, The Sea of Tiberias, recounts the primeval history from creation until the death of Adam, with a final notice about the life of Christ. The titular sea is the primordial ocean before the creation of the world. The most noteworthy aspect of this text is the description of a duck, identified as Satan, floating over the watery chaos. Satan is not created by God but rather aids him in the creation of the world. This dualism, coupled with the notion of pre-existent matter, diverges from Christian orthodoxy and has led to the suspicion of a Bogomil origin, a judgment that is uncritically applied to many Slavonic texts. The editors describe several earlier theories but wisely leave the question unresolved.

With the seventh work, About the Ark, the collection finally turns its focus from Adam to Noah. The text does not exist as an independent document but is always attached to a longer work, usually the Palaea Interpretata but also, in one case, the Apocalypse of Pseudo-Methodius. The text refers to the devil’s attempts to thwart Noah. He destroys the first Ark with the assistance of Noah’s wife. He then boards the second Ark—again with the assistance of Noah’s wife—and transforms into a mouse in order to gnaw through the floorboards before he is attacked by cats. The demonization of Noah’s wife, which had a long afterlife in medieval Christianity, is also prominent in Islamic tradition, beginning with the Qur’an.

The last work, the Ladder of Jacob, is distinguished from the others in several respects. First, it is the work which is most familiar to scholars of the Pseudepigrapha and Second Temple literature, owing to its inclusion in Charlesworth. Second, it is the only work in the collection to focus exclusively on the postdiluvian period. Finally, a portion of the Hebrew text was recovered in an eleventh century manuscript from the Cairo Genizah, which provides a Jewish background that is not found among the other works in the collection. The text is an account of Jacob’s famous vision (cf. Gen 28), in which he sees a series of twenty-four human faces along the twelve steps of the ladder. An angel explains that the faces represent kings who will oppress the Jews and destroy their Temple. However, a righteous king will arise and punish Israel’s enemies. Despite the apparent Jewish background, this work, like About the Ark, forms part of the Palaea Interpretata.

The Ladder of Jacob is a suitable conclusion to the work as it opens up two future avenues of study. First, a number of Slavonic texts, including the Slavonic translation of Esther, are not based on Greek texts but were translated directly from the Hebrew.[3] The authors (p. xv) note that this phenomenon is mostly restricted to medieval compositions such as the Sefer Yosippon and the Chronicles of Moses, but it also involves the two most famous Slavonic Pseudepigrapha. Of the two recensions of 2 Enoch, it is the longer, secondary recension which includes isolated Hebrew words, such as the names of the months or the designations of the different heavens (e.g., Aravoth). Similarly, Abrahram’s iconoclasm in the Apocalypse of Abraham more closely resembles the stories from rabbinic (and Islamic!) literature (e.g., Gen. Rab. 38:13; Q 21:51-70) than the cognate episode in Jubilees (cf., Jub. 12). The engagement with contemporary (as opposed to Second Temple) Judaism is a hallmark of Slavonic apocrypha.

The other hallmark of the Slavonic tradition is the Palaea literature which assembles diverse parabiblical traditions into one narrative complex. The value of these works, apart from their intrinsic interest, is the light they shed on the context in which Pseudepigrapha and pseudepigraphal traditions are transmitted. Among these works is the Palaea Historica, an originally Greek composition which has been recently translated into English by William Adler.[4] This work was more popular in Slavonic than in Greek, and the published Greek text represents only one recension of a notoriously pluriform composition. A separate work, the Palaea Interpretata, is our primary source for the Ladder of Jacob and the Apocalypse of Abraham. It includes a typological commentary on the history of Israel, much of it venomously anti-Jewish. Ironically, this very same text includes works translated directly from Hebrew, including the aforementioned Chronicles of Moses and, apparently, the Ladder of Jacob. This work has not been translated into a Western European language, although Kulik has informed me that he is preparing an English translation and that Christfried Böttrich is working on a German version. One hopes that these forthcoming translations will encourage further study of the Slavonic tradition.

The study of the Slavonic Pseudepigrapha is a field that still needs pioneers. This present collection, with its lists of manuscripts, detailed commentaries, and extensive bibliographies (in Latin and Cyrillic characters) provides an excellent foundation for understanding this material. It should provide a much-needed stimulus for future generations to tackle the Slavic languages necessary to read the primary and secondary sources.

[3] For a quick summary, see  http://www.yivoencyclopedia.org/article.aspx/East_Slavic_Texts.