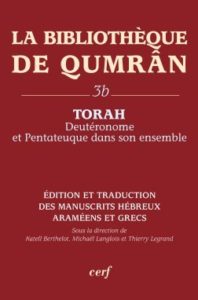 Scholars of the DSS now have a new series with which to consult thanks to the planned nine-volume French translation published by les éditions du Cerf. The text of each volume presents the Hebrew, Aramaic, or Greek text of the scrolls on the left page with the accompanying translation into French on the right. For both the original language and the translation, textual notes are provided. The former uses the alphabet to indicate footnotes, whereas the latter employs the usual Roman numerals.

A unique approach of this series is the choice to group DSS texts thematically around their connection to the books of the HB (similar to Vermes or Wise, Abegg, and Cook). This is in contrast with other volumes that list them consecutively according to the number of each scroll (e.g., García Martínez and Tigchelaar). Thus, as the title indicates, the texts included in this volume (3b) are associated primarily with the Pentateuch as a whole or, more generally, with regulations typical of Pentateuchal legal texts. In the previous volume, 3a, the majority of the scrolls are more directly tied to Deuteronomy.

At the current time, the series has four titles in three volumes:

The remainder of the series will presumably continue publication following the order of the HB.

Contents of Volume 3b

The contents of this volume, 3b, are as follows (English titles derive from the volumes indices; see next section):

Where I have indented the scrolls associated with the Damascus Document and the Community Rule above, the table of contents of this volume unfortunately leaves these in-line with the rest of the contents, making it difficult to note visually their interrelatedness.

Reference Features of this Title

Each volume includes a useful “Index of Manuscripts” in the back, where three different collated tables present the scrolls in various orders, along with the relevant page numbers.

In addition to the table of contents (also in the back of the book, following French convention), this makes navigating the contents very easy.

There is a thirty-one-page index of ancient sources, which includes the HB, NT, Pseudepigrapha/Apocrypha, Testament of the Twelve Patriarchs, DSS (covering the entire corpus, not just those in this volume), Rabbinic Literature, and other ancient sources such as Josephus, Philo, Pliny the Elder, Aphrahat, Didache, Epistle of Barnabas, and Eusebius of Caesarea.

Each of the scrolls included in this volume is preceded by a brief critical introduction. In addition, the section on the Community Rule (1QS) includes both a general introduction and introductions specific to each parallel fragment from cave 4. Also unique to the introduction to 1QS is a table showing where parallel fragments attest to various portions of 1QS as well as readings that are not included for whatever reason. A final, valuable reference pertaining to 1QS is the synopsis of 1QS V with 4Q258 and 4Q256 that presents divergent readings side by side (in French translation only).

The critical editions of the texts are based on the series Discoveries in the Judean Desert (DJD); if a given text has not appeared in DJD, it derives from the editio princeps. Where applicable, the series also takes advantage of new research on the scrolls and as a result will sometimes depart from the DJD or editio princeps. This type of departure is indicated by letter footnotes in the text of the original language.

The textual symbols are explained in the volume introduction and are consistent with other conventions. The text of the original language will also occasionally have underlined sections that indicate a reading found in parallel texts when extant (this is not explained in the table of symbols, but under “remarks” on the preceding page).

Regarding the translational philosophy of the series, the introduction states that translators attempt to provide as fluid a reading as possible, without sacrificing exactitude. To provide an example of translational style, I offer a comparison of the Hebrew text of 1QS V, 13–14 with the French translation of this volume, a German translation (Lohse), and several English translations (Charlesworth; García Martínez and Tigchelaar; Leaney; Jassen; and Wise, Abegg, and Cook).

He must not enter the water in order to touch the purity of the men of holiness. For they cannot be cleansed unless they turn away from their wickedness, for (he remains) impure among all those who transgress his words. (Charlesworth)

He should not go into the waters to share in the pure food of the men of holiness, for one is not cleansed unless one turns away from one’s wickedness, for he is unclean among all the transgressors of his word. (García Martínez and Tigchelaar)

(Such a man) shall not enter the waters to approach the purity of the men of holiness, for men will not be purified except they turn from their wickedness, for uncleanness clings to all transgressors of his word. (Leaney)

He shall not enter the water to partake of the purity of the men of holiness, for they shall not be cleansed unless they turn from their wickedness: for all who transgress his word are unclean. (Jassen)

None of the perverse men is to enter purifying waters used by the Men of Holiness and so contact their purity. (Indeed, it is impossible to be purified without first repenting of evil, inasmuch as impurity adheres to all who transgress His word.) (Wise, Abegg, and Cook)

La bibliothèque de Qumrân surpasses the detail and number of textual notes of the Charlesworth series, but not by much. The footnotes in the original text pertain to alternate readings suggested by scholars, parallel texts, explanations of scribal notes, and references to other DSS that may be similar but not necessarily parallel. The footnotes in the French translation provide cross-references to non-DSS texts, parallels with other DSS, translational alternatives and rationales, and parallel readings or variations among parallel witnesses of the same text.

My only criticism of the series (or at least this volume) is that it is difficult to navigate within a specific text when flipping through the book. At the top center of left pages, one finds the full title of a given scroll while on the right pages, one finds the scroll number alone. Unfortunately, the column number or textual range is not indicated. While it is easy to find CD or 1QS, it often requires turning multiple pages to find the column number.

This new series is a welcome contribution to DSS research because it offers a new French translation to compare with others, it contains a wealth of textual notes as well as useful reference charts (when relevant), and it provides thorough indices (lacking in Charlesworth and García Martínez and Tigchelaar) that increase its usefulness beyond the translation alone.  Additionally, many will find that the thematic arrangement following the books of the HB facilitates research since it combines scrolls with a similar orientation.