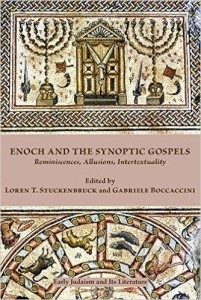 Founded in 2001 by Gabriele Boccaccini, the Enoch Seminar is based in the Michigan Center for Early Christian Studies at the University of Michigan. The aim is to bring together scholars and graduate students from various fields with the goal of exploring new methodologies in the study of Second Temple Judaism (and its surrounds). Highlighting the Enoch literature, the research includes almost all of the non-canonical writings that have survived from this period (and later) in an attempt to analyze them singularly as well as their influence on early Christianity, Rabbinic Judaism, and the formations of Islam.

Organized Seminars for the purpose of sharing ideas have resulted in the publication of several books as well as an official journal, Henoch. The present volume is the result of the Seventh Enoch Seminar (Camaldoli, Italy, July 2013), edited by Loren T. Stuckenbruck and Gabriele Boccaccini. The chapters focus on similarities and differences between the Enoch literature and the Synoptics: visionary experiences, birth narratives, the portrait and function of heavenly beings, parables, “son of man,” the experience of transformation, the role of wisdom and priestly functions, demonology, and the worship of the revealer (Enoch and Jesus).

Stuckenbruck and Boccaccini highlight the importance of the Enoch literature for scholars of Second Temple Judaism and early Christianity (“Introduction:  1 Enoch and the Synoptic Gospels:  The Method and Benefits of a Conversation”). While direct citations from Enoch are rare in the New Testament, and hence “Reminiscences, Allusions, and Intertextuality” being part of the title, nevertheless this literature can provide elements of a worldview that can heighten and/or sometimes re-interpret specific aspects of the Synoptics.

Before tackling the subsequent chapters (which are not numbered), I highly recommend becoming familiar with the basic Enoch literature. Most of the chapters include both lengthy citations as well as summaries of the various books, but it does help to review the overall literature first.

Gagné begins with a modern review of epistemology and its relation to visionary experience that is articulated through cultural understanding (“Narrative Descriptions of Altered States of Consciousness in 1 Enoch and the Synoptic Tradition”). Gurtner (“The Revelatory Experiences of Enoch and Jesus: A Comparison between the Book of the Watchers and the Synoptic Tradition”), analyzes the comparative settings and the nature of the experience for Enoch and Jesus, as either active or passive. The result is that Enoch’s experience is consistently related to the theme of “the end of days,” while the experiences of Jesus also function to emphasize his identity.

Richter (“Unusual Births: Enochic Traditions and Matthew’s Infancy Narrative”) and Petersen (“Enoch and the Synoptic Birth Narratives: A Thought Experiment”) examine the nativity of Jesus and its possible links to the Enoch literature. Richter argues that Matthew (through parody?) is upending the story of the Watchers in relation to the mixing of the divine and human through sexual activity. Petersen reviews the history of Weber’s concepts of authority levels (charismatic, traditional, institutional) to argue why Paul and Mark do not contain birth narratives (they remain at the charismatic level). However, most of the chapter is devoted to the comparison of Enoch and Paul as charismatic messengers who both have the ability to mediate between heaven and earth.

Bautch demonstrates that angels in the Enoch literature have specific roles and dominance over specific realms (“Heavenly Beings in the Enoch Traditions and Synoptic Gospels”). Angels in the Enoch literature are also associated with future reward and punishment in the afterlife.  However, the Synoptics have a more muted view where angels serve mainly as messengers. The only connection with the afterlife is when they communicate the resurrection of Jesus. Rather than angels, the gospels have Jesus conveying details of judgment in the coming “kingdom,” as well as eternal life after death. Bautch speculates that the reason for this may have been to diminish the role of angels that could be understood in comparison to pagan deities (Hermes, Hecate) by centralizing Jesus’s control of the afterlife.

Baynes (“The Parables of Enoch and Luke’s Parable of the Rich Man and Lazarus”) compares the genre of parable as utilized in Enoch concerning the fate of the rich and powerful with the story of Lazarus. Without getting lost in “parallelomania,” arguments can be made for both similarities and differences. The parables of Enoch and Luke utilize the concept of a messianic banquet to reverse status and class at the time of judgment. The differences can be assigned to different contexts but the rhetoric serves the same purpose.

Boccaccini (“Forgiveness of Sins: An Enochic Problem, a Synoptic Answer”) highlights the final judgment in the Book of Parables, particularly with the “son of man” references. While the judgment in Enoch is a future event, the Synoptics, by claiming Jesus to be this “son of man,” aligns the judgment with the present. This function is emphasized by the many stories of Jesus forgiving sins through healing now, and through one’s acceptance of Jesus in this divine role. There is also a discussion of the relationship to the descriptions and role of John the Baptist and his water ritual to contemporary traditions in the stories of Adam and Eve being immersed in water to purify their sin.

Grabbe, (“Son of Man: Its Origin and Meaning in Second Temple Judaism”) presents a full review of the term “son of man” beginning with a lesson on the grammar and its usage in Hebrew, Aramaic, and Greek. This article includes a useful bibliography on the research of “son of man” as it relates to the gospels. By late Second Temple Judaism, the title incorporated “chosen one,” the Anointed one,” and “the Righteous One” as synonymous; all of these titles were then applied to Jesus. However, the Christian innovation presented this figure as a now human manifestation who preached imminence rather than an event in the far-off future.

Assefa (“Matthew’s Day of Judgment in the Light of 1 Enoch”) surveys the one hundred and eighteen times the “day of judgment” appears in Enoch with a comparison of Matthew’s parables that include judgment. While much of the Enoch literature describes in detail the kind of judgment that awaits both the righteous and wicked, Matthew’s parables add to this the element of surprise; no one will know the day or hour.

Wright provides a history of the origins and concept of demons in the ancient Middle East (“The Demonology of 1 Enoch and the New Testament Gospels”). Demons are held responsible for natural disasters and personal suffering (diseases and mental affliction through possession). The idea that demons were unleashed by the Watchers is not referred to in the gospels, but the gospels assume that their audiences know all about them. One of the differences between the Enoch literature and the gospels is that the authority to exorcise demons is given to Jesus rather than god or his angels.

Drawnel analyzes the literary and structural patterns of incantations and rituals in relation to evil in the ancient world as they are adapted in Enoch and the gospels (“1 Enoch 6–11 Interpreted in the Light of Mesopotamian Incantation Literature”). While acknowledging similar structures, the differences can be assigned to different historical contexts. As in the previous chapter, angels in Enoch act as intermediaries sent by god to expel evil, but this idea is absent in the gospels.  Instead, the authority to expel and neutralize demons by Jesus is possible because of his authority to operate through the spirit of god.

With the exception of the Epistle to the Hebrews, Christ as priest in the Synoptics has not received much attention. Angel compares the priestly functions assigned to Enoch with those assigned to Jesus (“Enoch, Jesus, and Priestly Tradition”). This chapter also surveys what is known about the perceived functions of priests in Second Temple Judaism as conveyors of wisdom. Both Enoch and the gospels combine a priestly function with an emphasis on their roles as a revealer/teacher of wisdom.

Wold examines the wisdom motif more fully in an analysis of the role of the maskil in the Qumran literature (“Jesus among Wisdom’s Representatives: 4QInstruction”). In the Enoch literature, the distribution of wisdom is passed down through the righteous descendants. At Qumran, the maskil’s access to wisdom is among those elements that serve to validate his authority in the community. In the gospels, Jesus is presented as both having unique access to divine wisdom which validates his authority, but it is also distributed through John the Baptist and the disciples. Such revelations of wisdom validate the communities behind the gospels.

Analyzing the motifs in both 2 Enoch and the legends of Adam, Orlov focuses on the Adamic “bowing down,” typology, the role of angels, and “standing,” in relation to Matthew’s temptation in the wilderness (“The Veneration Motif in the Temptation Narrative of the Gospel of Matthew:  Lessons from the Enochic Tradition”). All of these elements are found in the opening narratives of Matthew. However, he claims that Matthew is deconstructing the “bowing down motif” of Satan’s refusal to bow down to Adam, with the eventual transformation of a human (Jesus) as the object of “bowing down.”

With a 40-page Bibliography, this volume is an incredible resource for research on Second Temple worldviews that may illuminate the gospels. Every chapter provides a disclaimer as to direct influence from Enoch, but recognizes that the Synoptics share concepts that were “in the air” in Second Temple Judaism. In addition to reminiscences, allusions, and intertextuality, the chapters also discuss the literary devices of typology, irony, and polemic in the sense that gospel narratives either conformed to Enochic traditions or re-interpreted them. The editors are correct when they emphasize that modern scholars of early Christianity and the New Testament must now add expertise in this literature to their toolbox of exegetical skills.

I do, however, have to mention my surprise at the absence of the correlation between the canonical books of the prophets, Enoch, and the gospels. With the exception of a few references to Isaiah’s suffering servant, the prophetic elements of the “final days” are not explored in depth as possible sources for Enoch, nor discussed as sources for the gospels. (A review of all the Seminars and papers may shed light on this issue.)[1]

The consistent references to “the fulfillment of scripture” (either stated or implied) in the gospels could certainly include Enoch and related materials, but Enoch traditions would not stand alone. Arguments can be made for the inclusion of several sources, all adapted or re-written for a particular context or to make a particular point. Granting a multiplicity of sources behind each gospel is one way in which to account for the absence of direct citations from Enoch, or deviations from a point of view in the Enoch literature. For example, a thorough exegesis of the nativity stories in Matthew and Luke is incomplete without acknowledging their reliance upon traditional prophetic views of the salvation of Israel and scriptural references to traditional views of the line of David. How does Matthew go about combining Enoch with this prophetic material?

A second point missing in the volume is an in-depth discussion of audience reception. Many of the chapters argue for some kind of reliance upon Enoch traditions, but of necessity that assumes that the audience knew such traditions. We know that Enoch was popular at Qumran, but what about the audience for the gospels? Does familiarity with Enoch presuppose a level of literacy or were these ideas conveyed through oral tradition? What about Gentiles in the gospel communities? Would they have knowledge of Enoch from exposure in the synagogues?

With the exception of these two points, Enoch and the Synoptic Gospels is an important compendium for scholars of Second Temple Judaism and the New Testament.

[1] A separate volume containing the rest of the proceedings from the conference is supposed to come out as Loren T. Stuckenbruck, Gabriele Boccaccini, James H. Charlesworth, and Matthias Hoffmann, eds, The Early Enoch Tradition and the Synoptic Gospels, Jewish and Christian Texts 224 (London: Bloomsbury T&T Clark, 2019).