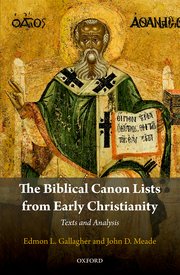 Edmon L. Gallagher (Associate Professor of Christian Scripture, Heritage Christian University in Florence, Alabama) is well known in academic circles for a monograph and several articles on the history of the canon. In the case of John D. Meade (Associate Professor of Old Testament, Phoenix Seminary in Phoenix, Arizona), this is his first publication in the field of biblical canon studies. His dissertation on the hexaplaric fragments of Job 22–42 is forthcoming with Peeters.

In the introduction (xii–xxii), the authors state that their aim is to present “the evidence of the early Christian canon lists in an accessible form for the benefit of students and scholars” (xii), where “early” refers to the first four centuries of our era. They intend to gather all these lists, to introduce them, to present them both in their original language and in English translation—often taking it from elsewhere, sometimes offering their own—and to provide scholarly literature for further discussion (see pp. xviii–xx). As they explain on p. xix, their book contains three lists that do not correspond to the initial promise: one from the fifth century, the list of Pope Innocent (231–235), and two non-Christian lists, that of Flavius Josephus in Against Apion and that of the Babylonian Talmud.

The work is structured in six chapters. The first one (“The Development of the Christian Biblical Canon: A Survey of the Early Period,” 1–56) summarizes the history of the formation of the Hebrew Bible/Old Testament and of the New Testament. Chapter 2 (57–69) contains the two Jewish lists mentioned above. The most substantial part of the book is found in chapters 3, “Greek Christian Lists” (70–173) and 4, “Latin Christian Lists” (174–235). The brief chapter 5 studies a Syriac list (236–243), while the sixth and final chapter examines the relations between the contents of the main biblical manuscripts and the history of the canon (244–60). Under the title “Antilegomena and the More Prominent Apocrypha” (261–84), an appendix provides basic information on 32 works presented in alphabetical order.

The book has been written with the intention of being used as a reference text. Each chapter and often each section can be read independently. To assure ease of use, the same information is offered several times. For example, each time a list mentions the “Books of the Kingdoms,” a footnote explains the correspondence of this denomination with the books of Samuel and Kings (such repetitions can be tedious for those who read from beginning to end). Apart from the ancient texts, scholars will find brief introductions and numerous and up-to-date bibliographical references. The works cited are not limited to English publications but include several titles in French and German (and one in Italian: A.  Camplani, Atanasio di Alessandria. Lettere festali; Anonimo. Indice delle lettere festali [Milan: Paoline 2003]). When convenient, the authors refer to web pages as well. For example, on p. 184 n. 50, a link allows the reader to glimpse the canon list on a page of the Codex Claromontanus. In this case, the images are particularly helpful in order to see how the obelos put in front of the title of some of the books looks. As it is practically inevitable in a work of such extent, there are a few bibliographical absences. For instance, an important book on Philo of Alexandria is missing: Naomi G. Cohen, Philo’s Scriptures: Citations from the Prophets and Writings (Leiden: Brill, 2007). There is a more recent edition than the one quoted of Stemberger’s introduction to rabbinic literature: Einleitung in Talmud und Midrash (München: Beck, 2011).

If every good book stimulates reflection, The Biblical Canon Lists from Early Christianity is no exception. I would like to put forward some thoughts that have emerged from the reading of it. On pp. xiv–xviii, the authors try to justify why their work is limited to the lists. Gallagher and Meade state initially that these are the object of the book not because they are the only element to be considered in a history of the canon, but because it is impossible to consider all the relevant elements in a single book. The authors then claim that the lists are particularly important because they reflect an author’s canon or at least they reflect it more clearly than other criteria, such as the books included in a manuscript or the books that the same author cites as Scripture. The thesis that it should not be taken for granted that the books included in a codex reflect the biblical canon of the person who had it copied seems well argued. Indeed, nothing prevents the copying of books considered “biblical” along with others considered “useful for reading” (see pp. xvi–xvii). On the other hand, I find it more debatable when the authors consider the citations an ancient author makes of books as Scripture as inferior to the list of books that the same author proposes. In commenting on Athanasius’s Epistula festalis 39 (119–26), Gallagher and Meade acknowledge that in his works Athanasius himself does not distinguish between the canonical books and the books that he recommends to catechumens (Wisdom of Solomon, Wisdom of Sirach, Esther, Judith, Tobit, Didache, and Shepherd). Given this fact, it is worth asking what value a list of canonical books has if its author does not seem to respect it. In other words, if the list of canonical books has no clear practical effects, we could construe it as the fruit of a theoretical exercise, or perhaps it obeys the desire to respect the authority of a received tradition (I will return to this point below).

A second reflection refers to the difficulty in defining what exactly a “canon list” is, a problem which Gallagher and Meade themselves acknowledge: “We have aimed to include the passages generally considered canon lists in the history of interpretation, though we recognize the potential problems of such terminology” (xiv). They are willing to admit that, if a canon list is a list of books that an author or council considers being part of the Bible, Josephus does not offer a list (xiii). They also point out that, in the case of Origen, we do not know if the list of twenty-two books “according to the Hebrews” represents his own opinion about the canon of the Old Testament or not—I would say that it is quite clear that it does not; see De Oratione 14.4 and the Epistle to Julius Africanus. Gallagher and Meade also acknowledge that the Muratorian Fragment is rather a prologue to the New Testament than a canon list (xiii, 175–77). In the same line, it could be added that a list by a synod or council, a list by a scholar such as Eusebius or Jerome, a list by a bishop who addresses his community (Cyril of Jerusalem, Athanasius), or a “poetic” list like those by Gregory of Nazianzus and Amphilochius of Iconium are quite different from each other from both the literary and the historical points of view. One could also discuss the canonical value of the stichometric lists, written as a measure to pay the copyist, as in the case of the Codex Claromontanus list—the other stichometric list studied in the book, the Mommsen catalogue or Cheltenham list, has a title that does allow us to take it as canonical: Incipit indiculum ueteris testamenti qui sunt libri canonici sic.

It is evident that no book can say everything about a subject. However, in this case, it would have been possible to take a little more advantage of the information gathered. An effort to assess the origin, importance, and influence of some of the lists is lacking. For example, on p. 109 we read, “It may be that Eusebius harboured a personal opinion distinct from what he could verify as the general practice of the church.” The statement is interesting, but it leaves the reader with the desire to know more about the possible exceptional character of Eusebius’s opinion. Gallagher and Meade carefully analyze what each list says, but usually they do not ask themselves why an author gives a certain list. Often, the answer to this question is not difficult to identify: many authors provide a list taken from tradition. In other words, they seem to be merely copying, with some variants, what they have found in another place. When Origen says that the Hebrews have twenty-two books, he depends on Josephus’s Against Apion, although Origen offers a more detailed list, probably using other sources. It is worth asking to what extent many of the subsequent Old Testament lists could depend on the information collected by Eusebius. The lists of Josephus, Melito of Sardis, and Origen enjoyed enormous diffusion through Eusebius of Caesarea. Only Jerome (in the fourth century) seems to have had direct access to a Hebrew canon list different from the twenty-two-book list of Josephus. It is not my intention to propose a reconstruction of the history of the canon lists in this review, but only to note that these dependencies are rarely explored in the book. To be sure, Gallagher and Meade do examine the possible connections between the Bryennios List and those of Epiphanius (75) and, in the case of the Old Testament list of Hilary of Poitiers, they say that he follows Origen (194). Regarding Epiphanius, we know that he admired Athanasius, but no connection between the canon lists of both is mentioned. An attempt to establish the relations of dependency among the different canon lists could have been a way to solve the problem of the fourth-century tendency to offer lists of the Old Testament that are close, but not identical, to the Hebrew Bible (28–29). Scholars have offered two different explanations for this fact: for some, these lists reflect an innovative attempt to follow the Jewish canon, which was more restricted than the books actually used by Christians; for others, these lists reflect the original or authentic Christian canon of the Old Testament. My suggestion is that the influence of Origen and Eusebius can help to explain why many lists of the fourth century are more restricted than the books actually used by the Church.

Before concluding, I point out some minor problems and typographical errors. The amount of information about the life of each author is somewhat uneven. For example, several data are given about Cyril of Jerusalem (101) or about Athanasius (128), very few, on the other hand, about Eusebius (99). In the case of Epiphanius’s life (157), Gallagher and Meade rely on a book that tries to rehabilitate the author of the Panarion: Young Richard Kim, Epiphanius of Cyprus: Imagining an Orthodox World (Ann Arbor: University of Michigan Press, 2015). Perhaps this is why they emphasize Epiphanius’s erudition while saying nothing of his limitations, which could explain some of the extravagances of his lists. When dealing with the reception of the book of Revelation (49–52, 279), it is striking that Gallagher and Meade speak of millenarianism but not of Montanism. The explanation of what a stichometry is appears when introducing the Mommsen catalogue (189); it would have been more logical to explain it in the previous section, dedicated to a similar list in the Codex Claromontanus. On p. 254 n. 86, they seem to identify the epistle of Baruch with 2 Baruch, when in fact the epistle is only a part of this apocalypse. On p. 71, “Cross 1998: 221–;” should be “Cross 1998: 221–222;” one reads “Pashca” on p. 78 n. 29; “Largarde” on p. 140; “Commentray” on p. 152 n. 400; “Claromantanus” twice on p. 174; “anitlegomenon” on p. 266; “antilegmonen” on p. 277; and “Maruice” on p. 285. There are problems with the brackets on p. 145 n. 373 and on p. 177 n. 15.

In summary, this excellent book would have been even better with a conclusion that attempted to draw some consequences from the presentation of the canon lists. This does not diminish in any way the important contribution that Gallagher and Meade have made to the study of the formation of the Christian biblical canon. Undoubtedly, the book fills a gap. Scholars should be grateful to the authors for the information offered in a rigorous and orderly way and especially for the bibliographic richness of this work.