Reading the Gospel of John’s Christology as Jewish Messianism (ed. B. Reynolds and G. Boccaccini)

Papers from the 6^ (2016) Enoch Seminar Nangeroni Meeting at Camaldoli, Italy.

The essays in Reading the Gospel of John’s Christology as Jewish Messianism: Royal, Prophetic, and Divine Messiahs seek to interpret John’s Jesus as part of Second Temple Jewish messianic expectations. The Fourth Gospel is rarely considered part of the world of early Judaism. While many have noted John’s Jewishness, most have not understood John’s Messiah as a Jewish messiah.

The Johannine Jesus, who descends from heaven, is declared the Word made flesh, and claims oneness with the Father, is no less Jewish than other messiahs depicted in early Judaism. John’s Jesus is at home on the spectrum of early Judaism’s royal, prophetic, and divine messiahs. 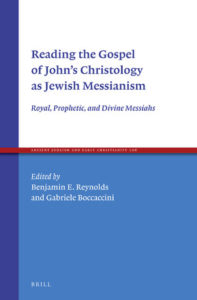