B. Allen Reviews Divine Wrath and Salvation in Matthew (A. Runesson) 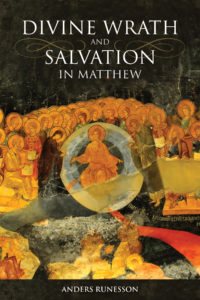 For nearly two thousand years euangelion (good news) has been proclaimed, first by Jesus and his Jewish followers, and later by the Christian church. Salvation, a significant part of this euangelion, has been the propulsion of its proclamation. Divine wrath, also significant to euangelion, however, has been unappreciated, neglected and forgotten. Anders Runesson, professor of New Testament at the University of Oslo, and expert in ancient Jewish synagogues, seeks to remedy this negligence, specifically in the Gospel of Matthew, maintaining that “divine judgment is at the center of the proclamation of the good news” (7).

In a passionate preface to Divine Wrath and Salvation in Matthew, Runesson introduces his methodology in an innovative way, prioritizing Matthew’s inception history above its reception history. He uncouples Matthew from the multifarious anachronisms common in the history of interpretation, and situates it within a Second-Temple Jewish context alongside contemporary Jewish texts. This allows Matthew to be studied as a “topic in Jewish origins” (xix). The preface is followed by an introduction and is subsequently partitioned into two parts: (1) Judging and Saving the Jewish People (2) Judging and Saving the Nations. In what follows I will proceed to encapsulate the sections of the book.

In the introduction, “To Distinguish Good from Evil,” Runesson recognizes that his work is not the first to discuss divine judgment in Matthew. Accordingly, he critically surveys recent influential studies (particularly, those of Daniel Marguerat, Blain Charette, David C. Sim, Petri Luomanen, and Nathan Eubank) in a way that clarifies where he positions himself in the conversation. Additionally, he briefly analyses various views on divine wrath in the ancient Mediterranean world. Runesson correctly points out that the Mosaic covenant provides the theological structure where divine judgment and salvation can function, which is paramount for following his thesis. Several key concepts crucial to Jewish identity, which cannot be ignored, assist in developing his thesis on divine judgment in Matthew. These are grace (including “compassion,” “unwavering love,” “favor,” and “mercy”), covenant, law, atonement, and righteousness (24). Another salient feature is Runesson’s contention that there is a distinction between the judgment of Jews and non-Jews in Matthew. Each will be judged separately.

Chapter 2, “The Criteria of Judgment for the Chosen People,” comprises over 150 pages of the book. Here Runesson asks: “on what grounds are individuals and/or groups in Matthew’s narrative world punished or rewarded (in this world and the next), and under what circumstances is access to the eschatological kingdom granted?” (53). For Runesson, the criteria of judgment discussed include sin and guilt, obedience and righteousness, vicarious righteousness, repentance and forgiveness, Pistis, Jesus, Works of the Law, and Covenant and Grace. These criteria are dependent on the validity of the Torah of Moses: “Lawlessness causes divine wrath to be unleashed” (76). Runesson observes that the criteria affect people’s judgment differently. Thus Pharisees and Scribes are judged harsher, and it is always their standard of righteousness that will not be enough to merit the coming kingdom. However, this is never said about the Jewish crowds’ standard of righteousness. In Matthew, strict observance of the Torah, as interpreted by Jesus, is how one merits the reward of the future kingdom. This explains why the Scribes and Pharisees can be criticized for not keeping the Torah, and why the righteousness of Jesus’ disciples must exceed the righteousness of the Scribes and Pharisees.

Runesson also discusses forgiveness as a criterion for the judgment of the chosen people, but gives special attention to the “unforgivable sin,” that is, the blasphemy of the spirit (Matthew 12:30–32). Runesson notes that this pericope has perturbed commentators who feel that the passage counters the Christian doctrine of unconditional forgiveness. He interprets the passage as a sin against God, not humans, and observes that it is not atypical or unsettling when examined next to Tannaitic literature. In discussing the criterion of works of the law, Runesson identifies three levels of works that will be scrutinized in the process of divine judgment according to Matthew. These are: a) External Deeds, b) Verbal Deeds, and c) Internal Deeds (165).

Concerning the person of Jesus as a criterion for judgment, Runesson notes that Matthew is careful to distinguish between Jesus and God, and between Jesus and the kingdom. Jesus is “a person to whom people may react in different ways, regardless of their attitude toward God and kingdom” (148). In relation to pistis, Runesson prefers a translation of “loyalty,” and argues that this loyalty is to be directed, according to Matthew, toward God, not Jesus, through faithfulness to God’s law (141).

Chapter 3, “The Limits of Salvation: Jewish Groups and the Judgment of God,” further advances the study of divine wrath and salvation aiming to identify the recipients of the Matthean Jesus’ words of judgment. Resisting a popular assumption that Israel as a whole is intended for judgment in every Matthean condemnation pericope, Runesson scrupulously investigates the characters in the narrative in order to categorize those condemned. This chapter includes informative sections describing the various Jewish groups in Matthew’s narrative. Groups who have direct political influence are discussed first. These include the elders, the chief priests, and the scribes accompanying them, as well as the Herodian rulers. Groups with indirect political influence are subsequently discussed. These include the Pharisees, the Sadducees along with the Herodians again, the disciples of John, the disciples of Jesus, “This Generation” and the crowds, and, lastly, the people and land of Israel. Because all of these groups are Jewish, all the criteria of judgment discussed in the previous chapter are applied to them. Nevertheless, Runesson discerns that “different groups are held responsible for different types of sins” (216).  Runesson finishes this chapter concluding that “Matthew is structured to condemn the various leadership groups mentioned and offer salvation primarily to the people of Israel, the latter most often identified with the crowds, i.e., with the majority of people in any given locale” (317). Quite significantly, Runesson contends that these groups are condemned for their lawlessness, not for their often-presumed erroneous Jewish traditions, which despite minor halachic differences, Jesus’ message and praxis endorse.

Chapter 4 serves as a conclusion to Part 1, reviewing the salient points from the previous chapters.

Part two begins with chapter 5, “Preparing the Nations for Judgment.” Here Runesson dismisses previous interpretations of Matthew which were and are used to devalue and extirpate Judaism in favor of the truth of the Church being the new people of God. He maintains rather that “discourses of divine judgment that are found in this Gospel are almost exclusively concerned with Jewish groups and individuals and represent expressions of a Jewish thought world, which maintains the status of the Jewish people as God’s people.” (345). He then deals with the fate of people who are non-Jewish in the narrative of Matthew, asking whether they are judged by the same criteria as the Jewish people or differently, whether all non-Jews are treated the same, either positively or negatively, or differentiated, and whether Matthew’s Jesus proclaims divine judgment as a strategy to promote a non-Jewish mission, creating an ekklēsia made up of Jews and primarily non-Jews who all practice a form of “Christianity.”

Runesson finds that non-Jews, while present in Matthew, are of minor importance. Nevertheless, they do fill important functions within the narrative. Yet Runesson argues that filling important functions in the narrative is not the same as being the focus and aim of the story being told. The texts in which non-Jews appear in Matthew are focused on the Jewish people and groups within Judaism.

Runesson continues this chapter discussing the general view on non-Jews in Matthew. He distinguishes instances when non-Jews are generalized as a whole from instances when they are mentioned as specific individuals. For Runesson, there is no gentile “bias” in Matthew other than a negative “bias.” He notes that when Matthew’s Jesus expounds on the Torah, non-Jews serve as examples of what not to do (5:47). When Jesus teaches how to pray, he instructs his disciples not to imitate non-Jewish methods (6:7). As Jesus teaches his followers to not worry about the future, non-Jews are presented as the opposite of the proper behavior (6:32).

There are, however, occasions when individual non-Jews are presented in a favorable light in Matthew. Runesson discusses three texts that describe non-Jews who recognize Jesus’ authority so that they are presented as his followers: the Magi in 2:1–12; the Roman centurion in 8:5–13; the Canaanite woman in 15:21–28. These display subordination, trust, and allegiance to Jesus, acknowledging him as the son of David, the promised Jewish messiah.

The remainder of the chapter is spent discussing the proselytizing movement and the missionary strategy as reflected in Matthew 28:20. Runesson offers a provocative interpretation of this passage which will be discussed below.

Chapter 6, “When Will Israel’s God Judge the Nations?” addresses the timing of non-Jews being judged. The fundamental aim of this chapter is to establish if non-Jews will be judged in this world, at the final judgment, and in the world to come, just as Jews are. Concerning judgment in this world, Runesson surveys texts such as Matthew 8:5–13 and 15:21–28 where members of the nations are judged favorably already in this world, and also where they have been judged with punishment as with the case of Sodom in Matt 11:23.

Chapter 7, “The Criteria of Judgement for Those Who Do Not Belong,” explores Matthew’s view of what the nations need to do in order to be “saved” from divine wrath after the death and resurrection of Jesus as the Jewish Messiah. Runesson examines the sparse texts that deal with the non-Jews and salvation from destruction. He concludes that “Matthew’s interest lies in addressing the Jewish people, not the non-Jews” (410). Runesson provocatively contends that when the post-resurrection Jesus commands in 28:20 to teach the nations all that he has taught them, he’s commanding them to teach knowledge of Torah and conversion/baptism: “…after the resurrection, the criteria of judgment on those non-Jews who convert to the eschatological form of Jesus-oriented Judaism that Matthew’s Jesus proclaims will be the same as for any other Jew” (413). Ultimately, Runesson does not preclude salvation for members of the nations who do not convert to this Jesus-oriented Judaism. He examines and explains the parable of the sheep and goats (Matthew 25:31–46), as a text that deals with the “outsider,” regardless of their ethnic or identity markers, and who do not belong to the followers of Jesus. Runnesson notes that the “insider” would be Jesus and his brothers, which could represent Jews and proselytes, and that neither “the sheep” nor “the goats” could be followers of Jesus, for if they were, they would understand the connection between the people they helped or did not help. When read in its historical context, this parable makes perfect sense, as Rome was devastating and persecuting post-70 Galilee. Those that blessed, rather than cursed, the Jewish people would also be shown favor.

Chapter 8 functions as the conclusion to Part 2.

The book then ends with a conclusion section that focuses on the major points of all of the previous chapters.

Runesson’s interpretation of Matthew 28:19–20, namely, that Jesus ordered his students to teach others all he had taught them, which presumably included the Torah and conversion to Judaism, is quite provocative though not unprecedented (David Sim has perspicaciously argued this as well). One can only imagine what the history of Jewish-Christian relations may have looked like had this interpretation of the “Great Commission” been adopted and taken seriously by Christianity.

Whatever the case, Runesson has effectively situated Matthew within a Second Temple Jewish context. His investigation is a welcomed addition to Matthean scholarship and the ongoing endeavor to reread much of early Christian literature as part and parcel of its original Jewish matrix.