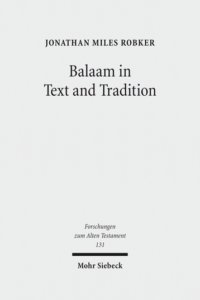 Balaam son of Beor is one of the most elusive and captivating characters in the Hebrew Bible. Known best from Numbers 22–24, the story goes that King Balak of Moab hired this Balaam, a well-reputed divinatory professional of some kind, to curse the approaching Israelites. Balaam accepts the job (with YHWH’s somewhat ambiguous permission) but stresses that, ultimately, he can only pronounce what YHWH wills—a conviction reinforced by his trusty donkey, who saves Balaam’s life by carrying him out of the path of a sword-wielding divine agent. Three times, Balaam opens his mouth to curse Israel—and, lo, each and every time what comes out is effusive blessing, much to his client’s dismay. After a fourth and final pronouncement consisting of a quasi-apocalyptic oracle, Balaam and Balak part ways, and Israel’s wanderings resume.

Balaam has tantalized readers and writers since antiquity itself, appearing with surprising frequency in the Hebrew Bible, at Qumran, and in the New Testament. More recently, he has also prompted no shortage of interest from historical-critical scholars. His diverse appearances have made him an effective case study for tradition-historical reconstruction. The conspicuous subplot with the donkey has been at the center of composition-historical debates over how Numbers 22–24 reached its present form. Growing comparative interest in Mesopotamian divination has offered a rich context for understanding the divinatory terminology and practices through which Balaam is presented. All of these approaches were infused with energy and urgency by the 1967 discovery of a reference to Balaam in the West Semitic plaster inscriptions at Deir ‘Alla in Jordan, which depict him engaging in visionary and divinatory activities that are strikingly reminiscent both of the Balaam story itself and biblical prophetic literature more broadly.

Jonathan Miles Robker’s new monograph, Balaam in Text and Tradition, is the latest contribution to this discussion. A published version of his 2018 Habilitationschrift at the University of Münster, Robker’s book immediately claims the distinction of being the longest and most comprehensive historical-critical study of Balaam in English (at least as far as I am aware). It is particularly welcome given the relative lull in scholarship on Balaam after a flurry of publications on the topic in the latter quarter of the twentieth century. Robker is therefore to be commended for issuing an invitation to renewed attention to this fascinating figure.

Robker’s deceptively simple title actually tells a substantial amount about his approach in this book. The entire project can be seen as coordinating the relationship between Balaam’s existence on the related but distinct planes of “text” (i.e., discrete literary portrayals of Balaam both within and beyond the Bible) and “tradition” (i.e., the more fluid cultural conceptions of Balaam that lie behind those individual literary portrayals). Robker basically adopts what might be called a composition-historical inflection of the tradition-historical approach that, as mentioned above, has often framed interest in Balaam. In effect, he positions the development of Numbers 22–24 as a microcosm of the broader development of the Balaam tradition: a positive view of Balaam as a genuine Yahwistic prophet was displaced by a negative view of Balaam as an obtuse, greedy diviner.

Robker begins with the customary review of previous literature, focusing especially on composition-historical reconstructions of the primary pentateuchal Balaam narrative. He divides these into three overarching approaches: 1) unity-oriented models, which see Numbers 22–24 as the elegant product of a single author; 2) source-critical models, which see these chapters as a compilation of originally independent but coherent documents; and 3) redaction-critical models, which posit a single, original literary core that was gradually augmented by various redactional strata. Tellingly, these three models roughly correspond with larger composition-historical debates in biblical studies as a whole, showing why Numbers 22–24 is an illuminating case study for the growth of the biblical text over and above any specific interest in Balaam himself. Robker’s survey is an efficient and helpful summary of the most important contributions to this discussion, engaging charitably with diverse scholarship across methodological, geographical, and linguistic divides.

Before Robker turns to his own appraisal of the composition-historical situation, chapter 2 lays the groundwork through a text-critical triangulation of the different witnesses to Numbers 22–24. Robker argues that because “these witnesses generally demonstrate very limited differences from each other, it is possible to both develop a plausible textual ancestor and reflect on the kinds of changes made within each textual tradition” (125). These two tasks occupy the chapter. After devoting individual subsections to textually problematic verses, Robker synthesizes his analysis in an annotated (and translated) “critical edition” of Numbers 22–24. While this commentary-style section makes for somewhat tedious reading, it eventually becomes quite helpful for the reader’s engagement with the close analysis that unfolds in the subsequent chapters. I, for one, frequently found myself flipping back to Robker’s “edition” of the text in order to situate his arguments in terms of where he stands on various textual or exegetical issues.

This text-critical work clears the way for Robker’s composition-historical reconstruction in chapter 3, the core of the monograph. Analysis of the synchronic structure of Numbers 22–24 leads Robker to conclude that the narrative cannot be a compositional unity. Rather, “the various compositional models proffered for Numbers 22–24 all find some justification” (185). Robker identifies eight stages of literary development: (1) the original, core narrative, consisting of most of the text; (2) the first major redaction; (3) an intermediary, fragmentary redaction; (4) the second major redaction; (5) the third major redaction; (6) the fourth major redaction; (7) the “negative redaction,” which included the donkey episode; and (8) final glosses (180; the proposal is conveniently visualized in a chart on pp. 186–95).

Chapter 4 moves from the primary Balaam narrative in Numbers to his other appearances in the Hebrew Bible, with brief attention given also to Qumran and the New Testament. Nowhere else do these corpora come even remotely close to the depth of the treatment of Balaam in Numbers 22–24. Rather, his other appearances are more like historiographical references, alluding to a narrative that the audience would have been expected to recognize instinctively. The obvious question of the extent to which that narrative can be identified with Numbers 22–24 is precisely why Balaam has proven so productive for a tradition-historical approach. In this connection, Robker argues that the positive presentation of Balaam in the earlier redactional stages of Numbers 22–24 is remarkably anomalous in the Hebrew Bible; other than Micah 6, the emergent biblical view of Balaam is decidedly negative. Robker wonders whether “this impugning of Balaam’s character . . . influenced or paralleled the redaction history of the text now found in Numbers 22–24” (263). It certainly seems to have influenced the New Testament, which generally shares this negative disposition. By contrast, the Qumranic sources reflect greater interest in messianic interpretation of Balaam’s fourth oracle (Num. 24:15–24).

From these diverse biblical and postbiblical portrayals of Balaam, Robker moves in chapter 5 to the most famous extrabiblical portrayal: the plaster inscriptions at Deir ‘Alla. He offers an overview of the history of the find, an argument that it reflects “Aramaic with some southern influences” (277), and a transcription (helpfully in Hebrew rather than Latin characters) and translation of the text. This preparatory work sets the stage for considerations of its meaning, form, and Sitz im Leben, as well as—most importantly—its relationship to the biblical Balaam passages. Robker’s rather conservative estimation that the original core of Numbers 22–24 is roughly contemporaneous with the eighth- or seventh-century Deir ‘Alla inscription will certainly invite objection from the many scholars who situate Numbers 22–24 much later. Yet without coming down on this question of absolute dating, I find it difficult to argue with Robker’s assertion that “the oldest narrative layer behind Numbers 22–24 demonstrates an Israelite appropriation of a perhaps initially Aramean figure for a literary conflict against the Moabites” (305). However, this must not be taken to imply direct literary dependence, as some have asserted. By contrast, Robker wisely concludes that Numbers 22–24 and Deir ‘Alla “demonstrate a common tradition-historical background, but one that should not be overstated” (303).

Chapter 6, the last main chapter, represents in some ways that most significant jump from text to tradition, cutting across the different literary portrayals of Balaam (biblical and otherwise) in order to create an aggregate portrait of him. Robker attends to the following issues: his name, ethnic/national background, profession, and religion. I appreciated that Robker moves past longstanding scholarly attempts to pin down Balaam’s ambiguous national origins, instead suggesting (correctly, in my opinion) that “leaving his background general allows the audience to interpret more freely whence he came or even consider him ‘the foreigner’ in general” (311). However, I wonder whether Robker’s detailed analysis of technical prophetic and divinatory terminology ultimately becomes too subservient to his “positive-to-negative” tradition-historical trajectory. For instance, I think that in some ways, his own compelling readings of these terms undercut his claim that the “ascription of mantic ability presents a later reinterpretation of Balaam’s character” (344).

In a book of this length and detail, there are, naturally, several other individual points with which I might quibble, such as certain text-critical emendations or composition-historical reconstructions. For the purposes of this review, however, I think it would be more useful to focus on an overarching concern. Robker’s analysis is, in my opinion, ultimately somewhat limited by the fact that, generally speaking, he does not push beyond the usual canons of historical criticism. To be sure, he admirably addresses the literary development of the primary Balaam narrative, its textual transmission, its rootedness within a larger complex of Balaam traditions, and its connections with the broader ancient Near East. However, I wish that he had carried this analysis forward into different kinds of questions of a less reconstructive character (e.g., narratological, discursive, theological, or reception-historical). In this way, I found the book enticing but not fully satisfying.

The place where this limitation shows most clearly is Robker’s relative inattention to the literary artistry of Numbers 22–24. For him, this story is ultimately the most developed resource for tradition-historical reconstruction. This, in my opinion, is a missed opportunity. There can be little doubt that Numbers 22–24 has a long and complex compositional history. However, in its present form, it is a truly exquisite specimen of Hebrew narrative prose, on par in both plot and character development with the Joseph story, Esther, Jonah, or Ruth. If the Bible is sometimes vulnerable to the critique that it “tells rather than shows,” the Balaam narrative breaks this pattern, presenting a rich and compelling character through action and dialogue, not stenographic reportage. It is also, at times, riotously funny. While isolated reflections on these and other literary matters appear in sundry locations throughout Robker’s book, a more sustained treatment would have been desirable.

Of course, it is in the nature of biblical studies that even a monograph on a single figure cannot ultimately aim for full comprehensiveness; there will always be stones unturned, lest the book become so massive as to be unreadable. In this light, even this ostensible weakness of Robker’s study could well be conceived as a strength inasmuch as it points clearly ahead to directions for future research on Balaam. I am confident that for any such endeavors in the coming years, Balaam in Text and Tradition will serve as an indispensable resource.