C. Bay Reviews Philo of Alexandria and the Construction of Jewishness (J. Otto) 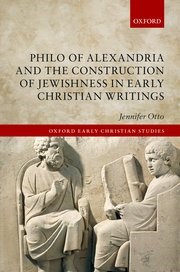 Philo of Alexandria is distinctive both as an ancient Mediterranean author/personality and as an object of scholarly inquiry. He is appreciated as the founder of Jewish allegorical exegesis, yet subsequent Jewish tradition showed little appreciation for this. He is often considered the exemplar for “Middle Platonism,” and in this he anticipated both Christian and “pagan” late antiquity philosophy. Together with his near-contemporary Flavius Josephus, Philo constitutes the embodiment of Hellenistic Judaism in the history of scholarship. And Philo, like Josephus, apparently enjoyed a distinctly Christian reception, at least through late antiquity. As with Josephus, the Christian reception of Philo as “honorary church father” has been commented upon by many, most significantly by David T. Runia, but also, for example, by Gregory Sterling, James Carleton Paget, and Hindy Najman. Otto enters the fray of scholarship on Philo’s Christian Nachleben by posing an interesting question: “What are we to make of the fact that Philo’s early Christian readers employ epithets other than Ioudaios, most often translated as ‘Jew,’ when they refer to him and his work?” (p. 4).

What Otto makes of this fact aligns with contemporary scholarly trajectories that see such identity categorizations (“Jew,” “Christian,” etc.) as discursive projects aimed at demarcating self from “other” and constructing boundaries within particularized socio-historical and ideological contexts. Otto engages with such scholarship in explaining the book’s scope: to show how the first three Christian authors to mention Philo by name––Clement of Alexandria, Origen of Alexandria, and Eusebius of Caesarea––“situate the Alexandrian as an alternative ‘near-other’ to both Christians and Jews … all the while maintaining the boundaries between the ‘Christian’ and ‘Jewish’ ways of life” (p. 26). She cites J. Z. Smith et al. as an entrée into the study of difference or “otherness” or distinction before a brief survey of the “parting of the ways” literature as a means of demonstrating why stating simply that “… Philo was a Jew and was recognized as such,” as Otto cites Runia as saying, “becomes problematic” (p. 11). In fact, what Otto sees as problematic in this is only so if one already assumes that Runia, for example, in calling Philo “Jewish,” does in fact assume a stable, essential concept of “the Jew.” Nevertheless, Otto’s point is well taken inasmuch as she wants to explore, problematize, and question how “Jewishness”––a term she prefers to “Judaism”––figured in Philo’s early Christian reception. Otto’s introduction also includes short, helpful overviews of Philo’s distinction between Ioudaioi and Israel, the correlation between ethnic/racial terminology and lived practice as identity markers in antiquity, and Philo’s place in the philosophical and Greek wisdom traditions inherited by ancient Christian authors.

Otto’s first chapter, on “Christian Readings of Philo,” argues that the Pythagorean-Platonic philosophical schools of Alexandria are the most likely milieu in which early Christian authors came to know Philo. This challenges a popular assumption that Alexandrian Christians, stemming from the Alexandrian Jewish community, naturally inherited these texts “in house.” It also (helpfully) de-centers an implicit scholarly discourse that recognizes Jewish and Christian poles as marking the boundaries of the discussion. Citing recent scholarship, Otto rather suggests that Christians (like Clement) in places like Alexandria often travelled in philosophical schools alongside non-Christian elites, and that Philo’s writings were likely endemic to such contexts. Thus, we have an alternative to a “Jewish-Christian origins theory” that sees Philo’s Christian afterlife in Alexandria as a natural outgrowth of a local Jewish-to-Christian continuity. We are hereby reminded that (Jews and) Christians in the ancient world often inhabited spaces modern scholarship too readily assumes to be “non-Christian,” and that Christians, Jews, and others, could interact in social fields like that of philosophical discourse.

Each of the three following chapters begins with a helpful lexicographical study, examining how Clement, Origen, and Eusebius each use terms like Ioudaios, Hebraios, and Israel. For each author, there appear to be loose yet intelligible distinctions implied between these terms, and in each case Otto uses these philologically-driven sections to point out helpful facets of terminological and ideological penchants.

Otto’s chapter on Clement challenges the work of Annewies van den Hoek, which suggests a distinction between Philo’s philosophical/theological and biblical-interpretive materials as received by Clement, and that of David T. Runia, which distinguishes between Philo’s roles as purveyor of Jewish tradition and adherent of a philosophical school. Alternatively, Otto argues that, for Clement, Philo’s identity and utility lie in his being a “Pythagorean,” which Clement twice calls him. While Clement may have considered him a Ioudaios (though he never calls him that), Clement regards Philo’s interpretive expertise regarding the Hebrew Scriptures, ancient “barbarian wisdom” which Clement casts as earlier than and a source for pagan philosophy. Clement thus “constructs an identity for Philo that blurs the opposition between Hebrew and Greek wisdom” (p. 89), apprehending Philo predominantly as a Pythagorean philosopher and thus a bridge between Greek and barbarian wisdom.

The chapter on Origen, who most frequently dubs Philo “one of those who came before us,” engages scholars like Runia and Ilaira Ramelli, who have interpreted this reception as “Origen’s claiming of Philo as a ‘predecessor’ into a continuous Judaeo-Christian exegetical tradition in which he also locates himself” (p. 116). Otto’s contention is “that Origen’s recourse to Philonic exegesis is more selective and critical than the translation ‘predecessor’ may suggest” (p. 116). To wit, Otto analyzes several key passages in Contra Celsum and Commentary on Matthew, among others, to argue that Origen neither endorses Philo tout court nor adopts him as Jew for the Church; rather, he recognizes him among Jewish and non-Jewish interpreters of old as one who understood proper hermeneutics. However, Otto is careful to note that Origen (almost) never adopts or sanctions Philo’s interpretation of the Pentateuch’s legislation. Otto thus problematizes the translation “one of our predecessors” for Origen’s repeated reference to Philo as tōn pro hēmōn tis if this is taken “as a statement of allegiance with the entirety of Philo’s exegetical project” (p. 134). The wholesale position of this latter reference may be a strawman, but Otto’s overall point is solid: Origen drew “deeply” and “with gratitude” from Philo, but still saw him as perpetuating interpretive errors vis-à-vis Mosaic law, just like “the contemporary Ioudaioi among his acquaintances” (p. 135).

Otto sees Eusebius, like Origen, as selectively employing Philo in particular rhetorical contexts. After providing background on Eusebius, his intellectual background and milieu, and his vocabulary (Hebraioi, Ioudaioi, Christianoi), Otto frames this chapter amidst scholarship that sees Eusebius’ Philo alternatively as “virtual/quasi/honorary/semi-Christian” or persistently Jewish (pp. 153-56). Her response is to demonstrate the breadth and diversity of Eusebius’ presentation of Philo: Philo appears in the Praeparatio Evangelica as witness to Hebrew theology (though Eusebius may tamper with quotations), an older and better (and proto-Christian) philosophy superior to other nations, and then as witness to the Jewish Weltanschauung/Lebensweise, both in its “Mosaic” legal form (the “bad”) and in its laudatory ascetic, that is, Essene, form (the “good”). In these contexts Philo appears as Hebraios, a “wise Jew” representing ancient piety and philosophy. In the Historia Ecclesastica, Eusebius portrays Philo as an educated Ioudaios embodying Jewish education and religious practice and then, in Book 2 (as in the Chronicon and Demonstratio Evangelica), as witness to the prophesied suffering/fate of the Jews following Jesus’ rejection/crucifixion. Finally, Otto discusses Historia Ecclesiastica 2.17, where Eusebius reads the Therapeutae of Philo’s De Vita Contempliativa as primitive Christians, using Philo as external witness (and admirer, though not convert) to Christianity’s noble, “ancient” beginnings. All of this Otto interprets within Eusebius’ overall program of casting Hebraioi as representing a pristine philosophical way of life realized later among Christians. Philo can represent or help define the Hebraioi, but also illuminates the Ioudaioi with their literal, legalistic lifestyle. In analysis, rather than reading Eusebius’ use of Philo as “dishonest and opportunistic,” that is, as “exploitative” (Sabrina Inowlocki) or “sophistry” (Aaron Johnson), Otto suggests that we take Eusebius’ life experiences (the Diocletian and Licinian persecutions) and convictions into account, and read his selective citation of Philo “as a process of separating the wheat from the chaff in Philo’s treatises, bringing them into conformity with the Gospel and ecclesiastical tradition that Eusebius is convinced is true” (pp. 194-5). This reading of Eusebius is a helpful counter to the still-current tendency to treat Eusebius firstly as a politician, and thus with unbridled distrust, beginning with Jacob Burckhardt’s characterization of Eusebius as “the first thoroughly dishonest historian of antiquity” (Die Zeit Constantins des Grosen [Leipzig, 1880], p. 334).

Otto’s overall contribution is to situate Philo “outside––or in between––the two increasingly differentiated identities” of Christian and Ioudaios (p. 197). Clement, Origen, and Eusebius recognized him as a “right” interpreter of Scripture’s philosophical truth, not the stereotypical Ioudaios, but not as a Christian. Otto concludes that Philo functioned, as “Pythagorean,” “predecessor,” and “Hebrew,” to “mediate between the categories of Christian and Jew while ensuring that the two identities remained rhetorically and conceptually distinct” (p. 197). The book ends with a short epilogue tracking briefly Philo’s afterlife in Christianity following Eusebius, suggesting a bit simplistically that, by the time of Augustine Philo becomes “the quintessential Jew” (p. 202), that is, not a complicated figure as in his Alexandrian reception.

Otto’s arguments are robust and her overall framework helpful. She offers a lucid, compelling narrative of Philo’s treatment and significance within early Christian texts. She engages scholarship on Philo, Clement, Origen, and Eusebius consistently, rendering her arguments intelligible in terms of contemporary scholarship. The one thing this reader wished the book contained were a more robust discussion of what it means that Philo “mediated” identity categories for early Christian writers. The reader may infer answers to this theoretical question from the work’s chapters, but this work prompts the question of what it means and how it works for a culturally-significant, authoritative figure of alterity to function discursively as, in Otto’s words, simultaneously “like us” and “like them” (p. 197). Theoretical discussions in scholarship are wont to name, but do not delineate clearly, how such “discursive,” “destabilizing,” “differentiating” rhetorics operate. Otto overtly broaches the subject of Philo’s complicating role in the enterprise of alterity in early Christian texts––why not follow this discussion through to a full-blown theoretical contribution? But it is not fair to criticize Otto for “could-haves;” I thus proffer this comment not as a criticism, but as a wish. Otto could have tackled the theory question more forcefully, but this would have required another chapter and taken the project beyond its now very clear-cut conceptual boundaries. Perhaps in the next book.